If you had a chance to glance at "LOCAL ICE: Photographing Cascade Glaciers.....", I hope you will enjoy this follow up piece about the surface features of glaciers and those within.  It is a cold and wondrous world of textures, color and light.  Having the skills of an alpinist and photographer has enabled me to safely capture the images you will see in  this article.
From Alaska to the Alps, and the Cascades to Patagonia, glaciers mantle the peaks in a white and blue drapery of snow and ice.  The riven ice fields are however not without hazards, and I have enjoyed scampering across them on foot or skis to climb a mountain, or complete an alpine traverse.   From the 70 mile long (probably shorter now) Kahiltna Glacier below, to the ice rivers near Mount Blanc, and the tributary glaciers flowing off the South Patagonia Icefield; glaciers are truly amazing.  To paraphrase photographer James Balog: "they are like an endangered species that is vanishing, and any photographic documentation may be the only way future peoples will know of their existence."

In this article I will illustrate three types of glaciers: the Icefield (covering less that 19,000 Square miles) which is a completely ice-covered area on land, with the ice flow radiating outward from the center (Patagonia), the Alpine Glacier that forms on the crests or slopes of mountains, and the Valley Glacier which is an Alpine Glacier that fills and flows down a valley, (Alaska, Alps and Cascades).  There are Icefields in Alaska, but they are not represented here.
From where glaciers are born high on mountains, their flow down and outward, to their terminus I have selected photos from four decades of mountaineering trips.  Let this primarily be a visual journey interspersed with some fascinating glacier trivia about the features we will see.

Whether a glacier begins as a small ice field that is perched on the side of a mountain, or in a basin at the peak's base, it provides an awesome spectacle to the weary climber clinging to a steep wall.  The photograph below was taken in 1978 while completing a New Route up the Northwest Ridge of the Citadel in the Cathedral Spires of ALASKA.

That same year friends and I climbed a New Route on Mount Hunter, also in ALASKA.  On the climb we traversed beneath a tremendous wall of snow, its many layers representing storms of heavy snowfall.  Here the Alpine Glacier is getting its start, hoping someday to join the great Kahiltna Glacier in the distance.

Winter snowfall (video below) in the Cascades feeds our glaciers, and provides a source of fresh water.

The North Face of Mount Buckner below, gives rise to the Boston Glacier.  At Buckner's base one can see a long horizontal crevasse at the head of the glacier and just below the rock face.  This is called the Bergschrund: a large semipermanent crevasse at the head of a glacier accumulation zone which separates actively flowing ice from stagnant ice above.

On Mount Rainier a curtain of icicles from the upper wall of a Bergschrund, frames a climber in the morning.

From halfway up the mile high North Pillar of Fitz Roy in 1984, we could see the beginnings of many small Alpine Glaciers flowing off the peaks of Pier Giorgio, Cerro Pollone and Aguja Pollone.  These smears of snow and ice rasp away at hard quartz monzonite rock, and with the help of the ferocious winds create a sea of amazing spires and razor-like ridges. 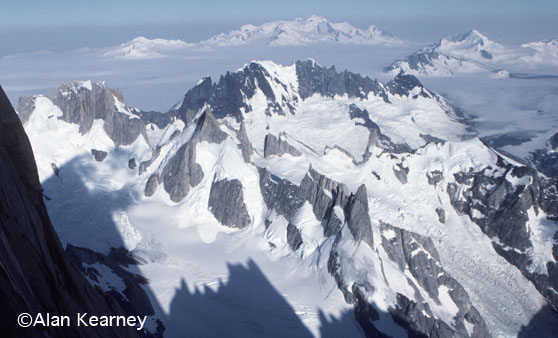 In the distance a portion of the South Patagonian Icefield is visible.  This 6,500 square miles of ice is the largest of its kind outside of Greenland and Antarctica.  It receives 25 feet of precipitation annually, mostly in the form of snow, and creates the fearsome winds and storms famous in Patagonia.  The Icefield acts like a gigantic cooler to the moisture laden winds coming off the Pacific Ocean, that combined with the narrow land mass lying between two oceans in that region, spells difficulties for hikers and climbers.

The Icefields of southern and northern Patagonia are in a state of recession (like most glaciers worldwide), with the exception of the 40 mile long Bruggen Glacier.  The Bruggen Glacier is part of the smaller Northern Patagonian Icefield, and probably due to localized climate is advancing.  In 1998 on a flight home, I was very lucky to have visibility and capture this photo of the Southern Patagonian Icefield showing the peaks of Fitz Roy and Cerro Torre in the top center of the image. 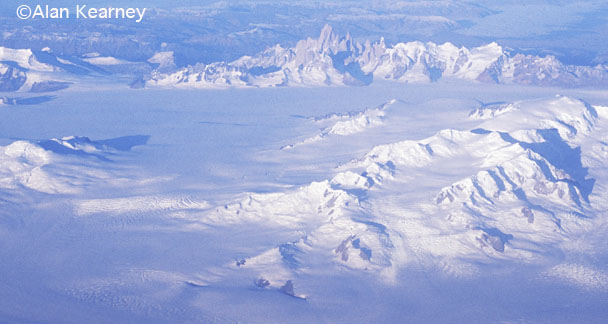 As the glacier gets into the rhythm of flowing the ice cracks and splits, giving rise to a plethora of natural sculptures.  From the surface of the glacier to deep down, snow bridges, icefalls, seracs, cryoconites, glacier tables, dirt cones, moraines, ogives, and crevasses grace the moving ice.
Snowbridges (although not glacier ice) are especially tricky formations for the alpine climber to cross.  They are the remains of winter snow that has blown across and covered a crevasse; eventually they melt and collapse as the summer progresses.  It is usually preferable to skirt around these unpredictable snowy spans, unless there is no other way.

Icefalls are a steep reach of the glacier with a chaotic crevassed surface and rapid rate of flow.  These jumbled masses of old snow changing into ice (firn) or dense glacier ice, are hazardous travel for climbers.  Viewed from a safe distance however, they are spectacular.  From the same return flight in 1998, I shot images of the Southern and Northern Patagonian Icefields.  The Northern Icefield provided a classic example of an icefall flowing down off the small continental ice sheet.

Within an icefall are seracs: blocks, towers, or pinnacles of ice or firn formed by the intersection of crevasses.  Their sheer beauty is captivating, but playing in among them is somewhat like treading a mine field.  It matters not whether it is hot or cold out, seracs can topple over anytime.

On the surface of the glacier in late summer dust and morainal debris (including small rocks) are blown by the wind or transported by glacier flow and settle into depressions on the ice.  Heat from the sun causes the darker material to melt deeper into the ice creating small melt holes (cryoconites).  On the Coleman Glacier in June of 1996 there were many of these cryoconites visible. 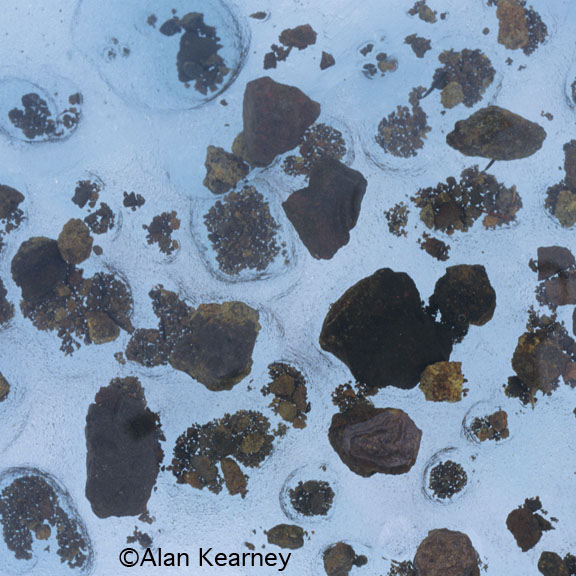 Later that year in October I was on the Coleman Glacier again.  It had been cold the night before, and each melt hole had a layer of ice over it.  Using Skala Black and White slide film, I captured some interesting photographs.

A rock that is left perched on an ice pillar by ablation of the pedestal and the surrounding unprotected ice is called a Glacier Table.  The first time I encountered one of these peculiar phenomena was skiing up the 22 mile long Lacuna Glacier in the Alaska Range.  It was April and the Glacier Table had a generous dollop of winter snow mantling it. 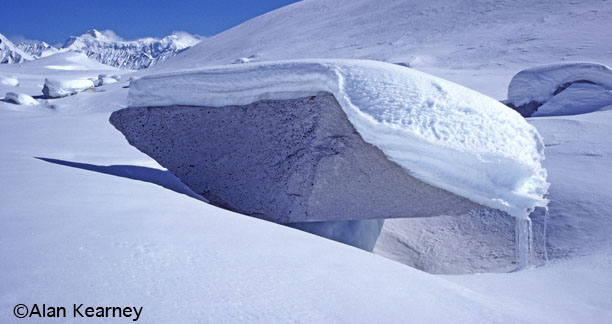 Years later while hiking up the Mer De Glace in the French Alps, my friend and I walked past a huge one enroute to do a climb.

Once the boulder slips off the ice pinnacle a Dirt Cone may form.  Rain then washes dirt down from the surrounding area and shapes the cone.  In 2008 the lower region of the Torre Glacier below Cerro Torre sprouted numerous Dirt Cones, and raging meltwater channels that were difficult to cross.

As the glacier grinds away the bedrock and moves forward it creates Moraines; deposits of rock debris shaped by glacial flow and erosion.  There are Lateral Moraines, like the one below of the backpacker hiking on it, and the Blue Glacier behind.

Medial Moraines are long strips of debris on the glacier surface, usually parallel to the flow, which originate at the juncture of two glaciers.  A classic example are the ones below of the Northern Patagonian Icefield, and the Torre Glacier below Fitz Roy.

And as if our eyes are not tantalized enough, nature creates Ogives on the glacier.  Especially visible in late summer or autumn, these arcuate bands or undulations of the surface of the glacier recur in a periodic pattern.

What often forms a barrier to glacier travel, is rarely more than 100 feet deep, and is sometimes unnerving to gaze into?  A Crevasse: a large crack in the surface of a glacier produced by the stresses of glacier flow.  With the exception of the very large continental ice sheets, Crevasses do not reach a depth of more than 100 feet, since below that depth the ice is plastic and not brittle.  With a bit of mountaineering skill one can climb down into these cold fissures to get some cool views.

Often in the summer after the seasonal snow has melted, it is fun to practice ice climbing in the shallower Crevasses.  Below a climber bridges a small crevasse, while I got into the best position for a photograph.

Of course on Mount Baker we do not have steel ladders going down to the glaciers; but it is a typical scene in the Alps where the alpine environment is altered and manicured to enable easier travel.

On the glacier's lower reaches below the firn line, is where much of the meltwater runs off the ice.  The bare ice in late summer or early fall  disgorges any ground up bedrock material, or any objects that have become interred in the ice river.  Its like being at the county dump and watching bulldozers move around piles of garbage, but on a slower timescale.  In August of 2004 while hiking on the Mer De Glace, I observed bits of broken glass on the ice surface: the remains of beer and wine bottles thrown down onto the glacier from a hut high above and many decades before.

The snout of a glacier is usually benign, with a tapering gentle slope of ice.  But if the terminus ends above a drop off or cliff, chunks of ice may calve off and litter the ground below.  In July of 2000 the Roosevelt Glacier was such a place; dangerous to hike through with the threat of falling ice from above.

And in 2008 a lobe of the Marconi Glacier in Patagonia was spitting off chunks of ice, making travel difficult.  We also found interesting terrain along the edge of meltwater canyons, of the dry glacier.

Meltwater channels form on the lower surface of the glacier in summer, carrying water down in sinuous little streams and sometimes into moulins.  These meltwater holes can go all the way down to bedrock, but some don't.  On the Easton Glacier this last autumn, I climbed 12 feet down into a small one just for a photo op of the meltwater channel in the bottom.

Finding pleasing colors (like the image above) at a glacier snout is difficult.  It is generally a dirty region where the ice machine is constantly releasing and dumping morainal material.  Like a pig in garbage, most receding glaciers have "their" snouts in piles of debris, or snuffling about nearby.
Below the dark and dirty terminus of the Coleman Glacier is a typical scene in the Cascades.  Once a bit of organic material accumulates, plants can get a start.  Then a few vibrant wildflowers will colorize a drab palette.

Posted by Alan Kearney at 11:19 AM No comments: