Since I never reported this route anywhere after Dana Hagin and I climbed it in July of 1996, I felt it was time I wrote it up.  Especially since there has been activity on Inspiration's north side since 1977 when Alex Bertulis and the Russians climbed the North Face.
The rock in the Pickets is primarily Skagit Gneiss, and although cracks are not numerous, nor the rock as solid as granite, the soaring glacial-sculpted faces more than compensate.  Added to that the unpredictable weather, transient state of the small disappearing glaciers, and brushy approaches make for a true North Cascades experience.
I had scoped Inspiration's northeast side two years before when climbing the North Face of West McMillan with Bill Pilling.  Bill and I not only had a good look at the face, but figured the easiest way to it was to rap and downclimb from the Inspiration/McMillan saddle to gain a ledge that would allow one to traverse westward over to the Northeast Buttress.
Then in July two years later, Dana and I trudged in the same way to Terror Creek basin in beautiful sunny weather.  Pickets maxim: "Even if there isn't a cloud in the sky, there's sure to be fog or rain the next day."  Its as though the craggy spires of the Twin Needles, Himmlehorn, Degenhardt, Pyramid, and the McMillans reach up with giant invisible hands and squeeze the moisture right out of the clouds.  Ask anyone who's been there.
An early start on day three allowed Dana and I to reach saddle in time to witness morning light
paint the walls, ridges, buttress, gullies, gendarmes and pinnacles.  Indeed nowhere is there such a plethora of mountain features as in this dense collection of crags.
Naturally it is not Chamonix granite (which I can verify is pretty solid stuff).  Nor is there a tram to the top.  Both of which guarantee a crowd free experience, and adventure alpinism of the highest order.  Particularly fond of these little mountains myself, I would return with Dana in 2003 to climb McMillan's North Buttress, and in 2008 put up the DNB on the same peak with Erik Johnson.
As Dana readjusted the pack loaded with bivy gear for one night, clothing, water and snacks, I tossed the ropes down for our first of several long rappels.  Sporadic small stones peppered the slopes, but nothing big.  The ledge Bill and I spotted in 94 was snowy but not difficult, and by noon or so we were lacing up rock shoes on the buttress, some 500 feet above the glacier.
With boots stowed in the one pack, the follower became the cleanup man and workhorse.  One can try various options on the bigger steep climbs on how to get the gear up the route.  The leader and follower can both carry packs, but ultimately the leader gets bogged down on harder bits and has to haul.  And as the Pickets are not granite domes close to the road, crampons and axes are a necessity.  When leading I prefer to be unencumbered, and a tiny pack with water bladder and windshirt is the most I'll carry.
The climbing was not too hard being of generally the face variety with some cracks here and there.  I got one "house of cards" pitch that comprised large flakes stacked one on top another.  The idea was to not knock any on Dana or my lead rope.  In places there were streaks and swirls of quartz in the rock that added an artistic appearance to the wall.

On up the buttress we swung leads until the sun began its decline.  No decent ledge offered itself until we peeked around the corner onto the North Face.  There just off the buttress crest was perfect ledge for two, with a snowpatch for water.
Now that guy in California that makes the pricy clothing once said this about bivouacking: "If you carry bivy gear you will bivouac."  With a few exceptions, it has been my experience that on really big routes you will bivouac anyway, but without ANY bivy gear you will be quite uncomfortable.
There is much to be said for a mug of HOT coffee or cocoa in the early morning on the chilly northern alpine face of a big mountain.  Take your pick.  We had a double bivy sac that protected both of us, and each had an insulated jacket.  I got 5 hours of sleep, which is a lot for a bivy.  And even the most amateur photographer with a point and shoot cannot fail to capture the grandeur of the mountains in morning and evening; all of which is lost to the one day climber frantic to reach the car without switching on the headlamp.

On day two Dana led off up broken rock toward cleaner cracks high above.  Some pesky clouds had materialized overnight, but the climbing was exhilarating and exposed.  The pack was lighter, the rock was still dry, the troubles and confusion of the world were somewhere far away, and we were having fun.
In places the gneissic rock had razor sharp edges from flakes and chunks that had fallen away; one had to be careful with the rope.  And there was always the uncertainty of finding the raps and descent off the top in a whiteout.  But I had climbed the South Face in 1991, so at least had an inkling of the way down.
Up and up we climbed to where our new route on the buttress coincided with the East Ridge; not much evidence of traffic on it though.  And then the fog moved in shrouding everything in a damp opaque curtain of white.  Find a crack, get some gear in, keep going, hope it doesn't start raining.  No idea where the summit was inside that fathomless cloud.  If only we could have seen something; McMillan Cirque, Fury, Luna, Picket Pass, each other, anything!
And although there was no view from the top, partway down the West Ridge the fog burned away and the sun came out.  Terror Creek basin and a sea of peaks southward dotted the horizon.
Back in camp we sprawled on the slabs in the sun, cooked a fine dinner, and that night once again watched the stars fill the sky over the black imposing silhouette of Inspiration Peak.


There is a place where we will all go.
But to tell the truth, where it is, I don't know.
If I had any say about it,
It would be on top of a craggy summit.
Where wind and snow, would blow my bits,
Down into those icy pits.
And there the glacier would munch and grind,
And of me, there would be nothing left behind.

On a sunny March day last week I joined mountain goat biologist Tana Beus for an adventurous day in the Mount Baker backcountry.  Her mission was to check on a remote wildlife camera and place another one in hopes of getting photographs of some of our elusive Northwest animals.  The plan involved skiing up over Herman Saddle, across the Chain Lakes and then descend into the headwaters of Wells Creek.  It was an adventurous and physical day in the mountains. 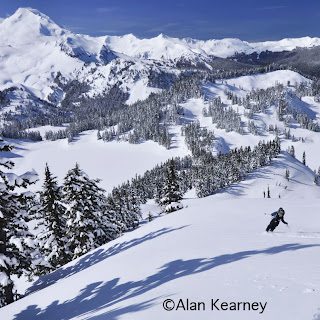 For the full blog go to alankearney.com  and "Adventure Skiing In Wells Creek".
Posted by Alan Kearney at 11:16 AM No comments: 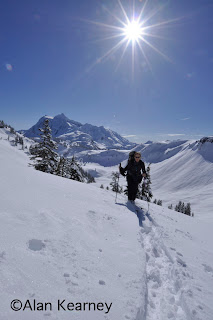 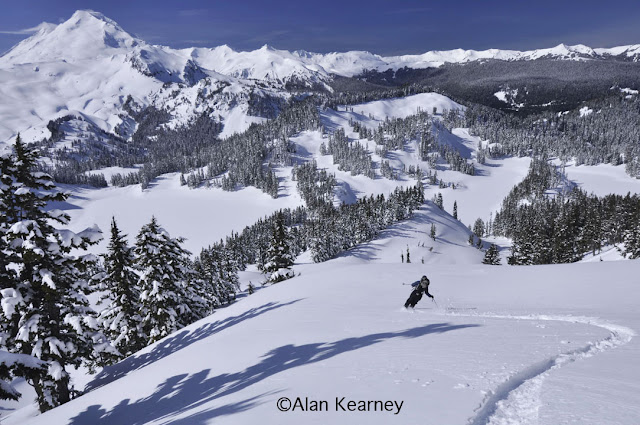 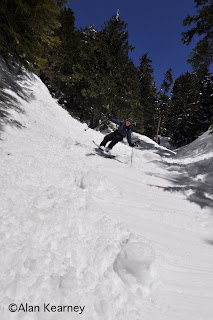 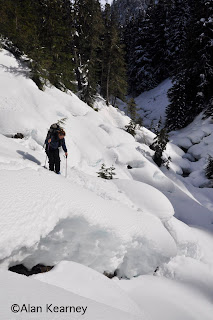 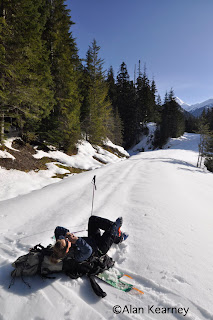 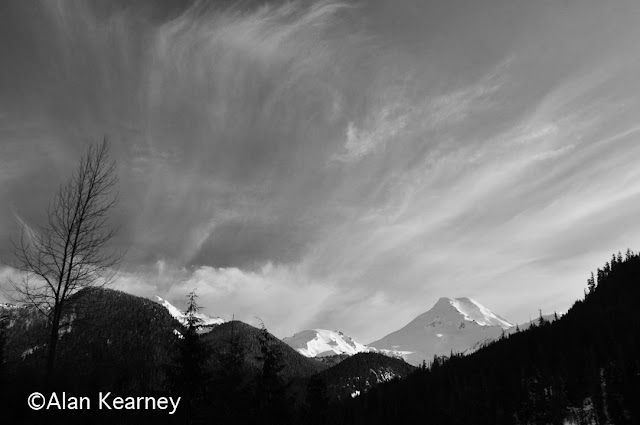 Posted by Alan Kearney at 1:09 PM No comments: