Here is the first of many SOS (seniors out skiing) episodes, although Gregg Cronn at 51 doesn't quite qualify for the age bracket;  myself at 59.97 years of age does.  It was "Kronnhoffers" (my nickname for Gregg when we were guides) spring break from teaching, and he wanted to ski the peaks near Joffre and stay in Keith's Hut.  Especially since the temps here in Washington were supposed to be warm, we were hoping for spring powder in the far north.  Any chance to get in some foreign travel without buying a plane ticket is fun. 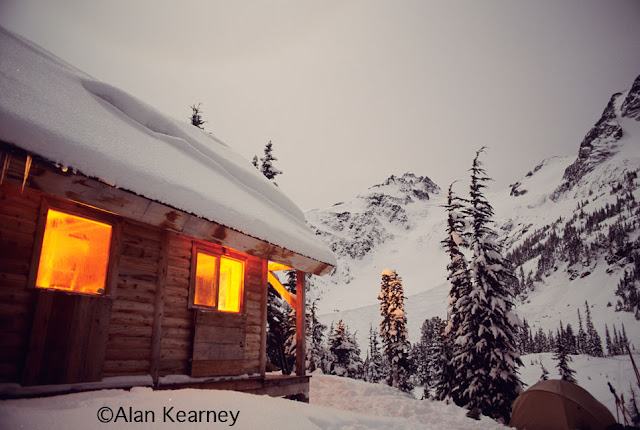 I had been to the hut 19 years before and enjoyed bony skiing, cloudy weather, and a ultra crowded cabin on New Year's eve.  Yuck!  Gregg and I chose a non-holiday, mid-week, and a good weather outlook for our two day outing.  At the Canadian border a rotund young man garnished with weapons, asked me if we were carrying any.  I said no. He said: "What will you do if you encounter a bear?"  I said: "It's winter and the bears are all asleep."  He replied: "It's not winter anymore!"  I could see I was in for a lot of tedious spadework if I had to educate him about mountain geography, elevation, spring snowpack, and meteorology.  I turned to Gregg and rolled my eyes, while the policeman tapped our passport numbers into his machine, and then handed them back with a frown.
That night we slept at the trailhead in the back of my truck.  Up at 6 am for a quick brew of brown hot stuff, into chilly ski boots, and skinning toward the hut by 7am.  With hardly a cloud in the sky the mountains were etched in sharp relief in the dawn light.  Along the trail the many bear dens had "Do Not Disturb Until Late Spring" signs out.  Let it be said that my four and a half years spent getting a wildlife biology degree was not wasted. 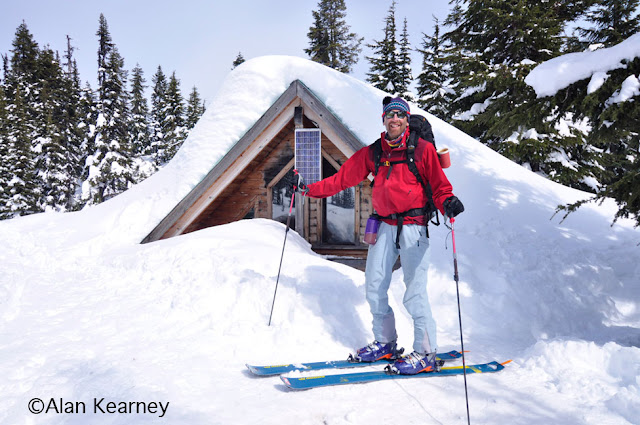 In three hours we reached the hut (the junior member of our party made in two and a half), dumped our sleeping gear, melted some snow for drinks, and headed upward.  A number of youthful skiers passed me on the climb up, and I would have broken their legs if I coulda caught up with them. 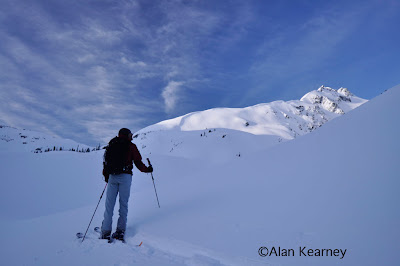 But it was beautiful day in the mountains, and time for me to get in shape.  The reason bears are skinny after a long winter is that they don't watch videos, eat buttered popcorn, and drink beer all the time.
The antlike shapes of Bellinghamsters and indigenous skiers were far above on the Anniversary Glacier.  A wintry wind swirled about as I stopped for a chocolate bar at the Matier/Joffre Saddle.  A bit higher Gregg was waving his ski pole and beckoning me on. 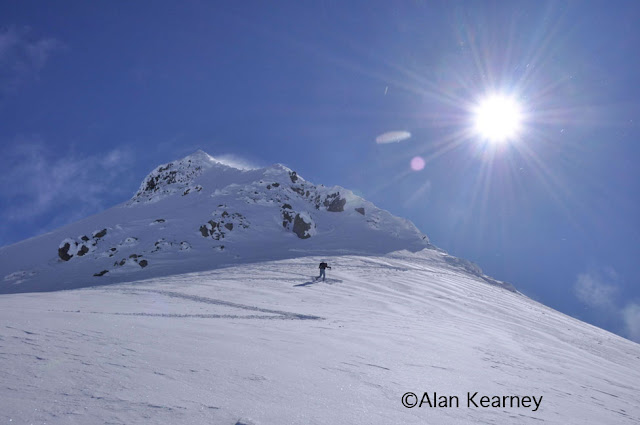 Higher yet and gasping for air, I ditched my pack and skis, and cramponed toward the summit.  Why was everyone else carrying their skis to the top?  The skiing on the upper slope didn't look too good to me; lumpy, icy and wind blown. 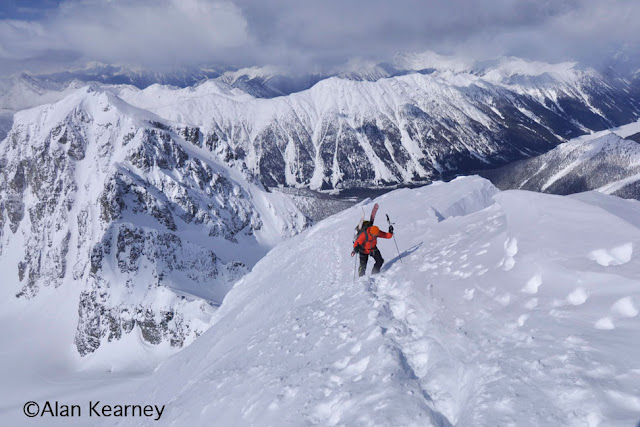 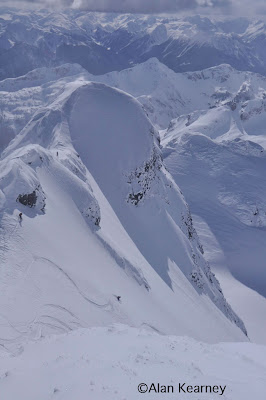 I suppose I ought to have looked at a map or confirmed with Gregg about the descent plan.  All of those skiers ahead of me had dropped off the southwest side to a col, and were skiing a fabulous powdery slope down to the glacier.  They carved graceful turns in the fluffy white stuff, yodeled and generally behaved as though they were having fun.
But it was tough to act like a curmudgeon on such a spectacular day in the high alpine.  The horizon bristled with peaks in every direction; some covered with ice, some with snow, many with snow and ice.
And far below the bears slumbered in their icy dens dreaming of juicy ptarmigans, ground squirrels, anthills, huckleberries, and plump border guards.  Facing a perilous descent without a weapon was unnerving.
Once back at my skis I tightened my boots, clicked into downhill mode, sucked some water, and headed downward into the white wonderland.  Turning was effortless in the April snow, and Gregg was having so much fun, he climbed back up to meet me for a second run.
Below the saddle we encountered even lighter six-sided ice crystals covering the glacier.
Back in the hut the day's participants (eight others) were commenting on the quality of the snow, and gabbing about this piece of gear or that.  Huts are nice unless you just want to go to sleep. 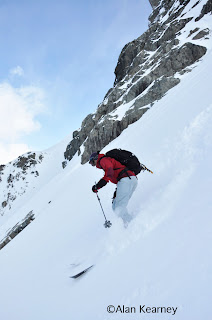 Gregg was up early the next morning, and soon we were skinning up towards Matier, making a left turn and heading east toward Vantage Peak, and hopefully untracked powder. The day was going to be warmer than the previous, and soon we were stripping off clothing, only to put it back on when the breeze picked up later.
We followed the West Ridge up Vantage, glad to have ski crampons for the lumps of rime and windblown hard snow.  Traversing around the south side we were able to skin right to the top.  To the west tiny dark shapes climbed toward Matier, while far below us a second group of black dots headed southeast toward a sea of mountains.
We had left axe, harness and crampons behind, and with a lighter pack I didn't feel nearly so breathless as the day before.  It reminded me of skiing out of Mount Hunter on a hot day in May of 1978.
Three of us crossed a low pass in the Peters Hills and gazed down into the snowbound valley to the south.  There about a half mile away, were three grizzlies Ursus arctos, a sow and two yearlings.  Out of their den, wide awake and HUNGRY, the three carnivores were digging out ground squirrels from beneath the snow.  They scented us and took off westward up and over a 1,000 foot slope; we were lucky. 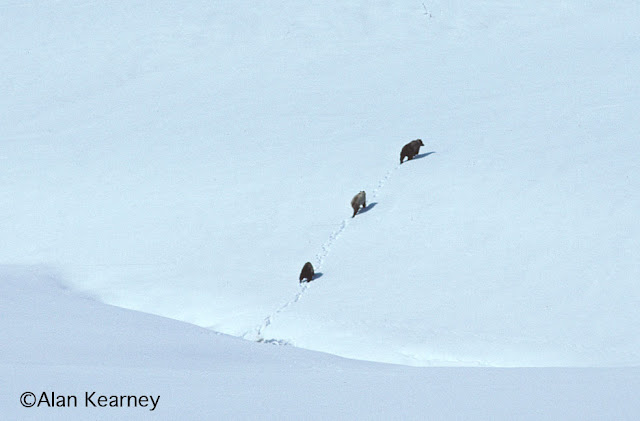 Had they wanted us, there is little we could have done.  No trees to climb, and no weapons.  Their vision is poor, and they smelled something strange and left.  No bears on Vantage, just a beautiful morning, with the mountains and hardy trees mantled in winter's whiteness. 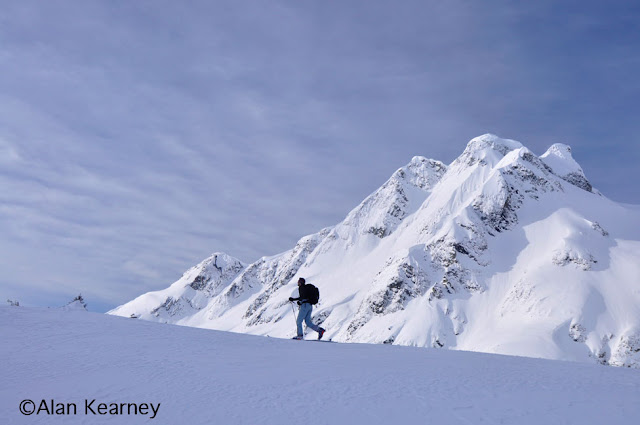 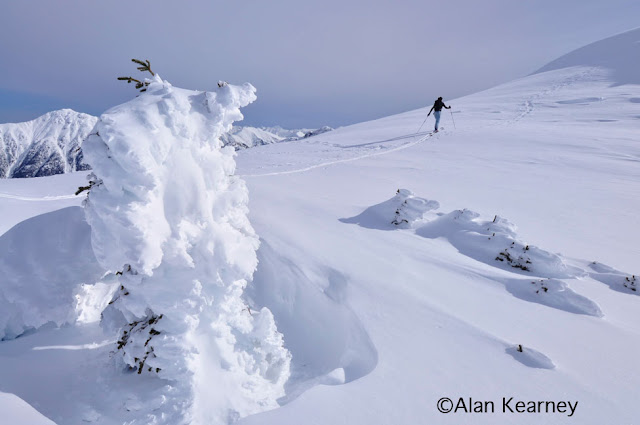 From the top of the peak it was necessary to sideslip down the West Ridge a bit to avoid the summit cornice, and gain access to a fantastic untracked slope.  Although a chopper had dropped some skiers the day before below Matier's summit, hence they skied the glacier and partway up Vantage's northwest side, below us the northeast bowl was pristine. 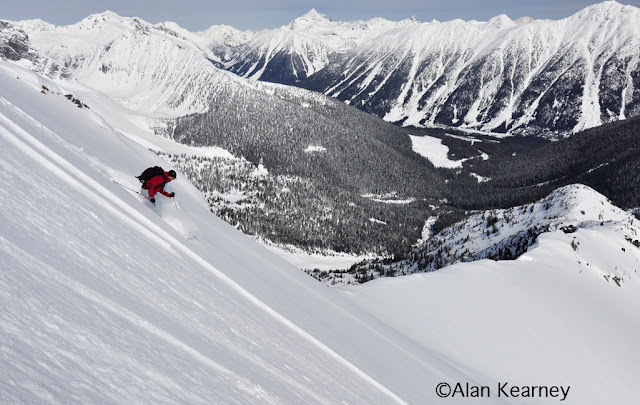 This was some serious fun! 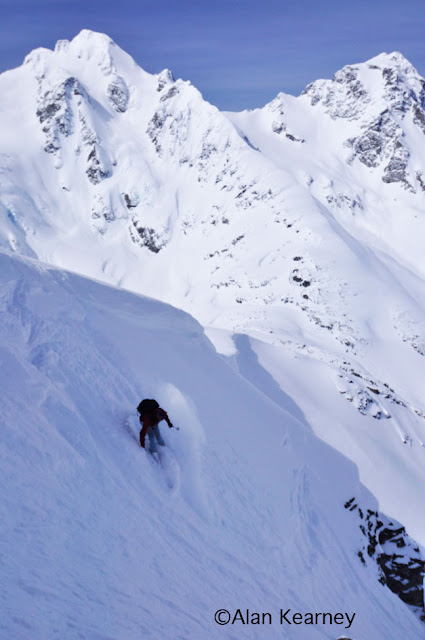 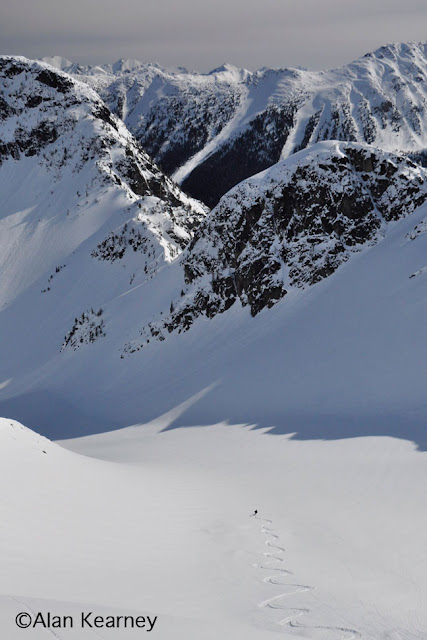 I yelled at Gregg to make a few more turns for my camera, but he just kept going on down into the valley.  It was a good climb back up, but we had to gloat over our first turns high on the slope. 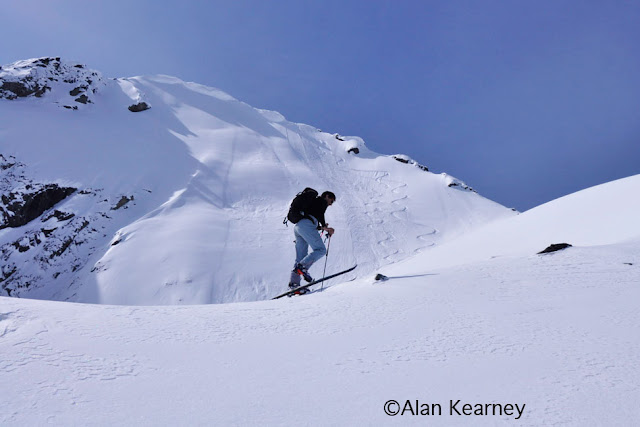 Once up and across the North Ridge, we deskinned and skied the northwest slope.  Gregg sideslipped the upper part of a narrow couloir, and then carved out the bottom, while I went down the west side and joined him in the cirque below. 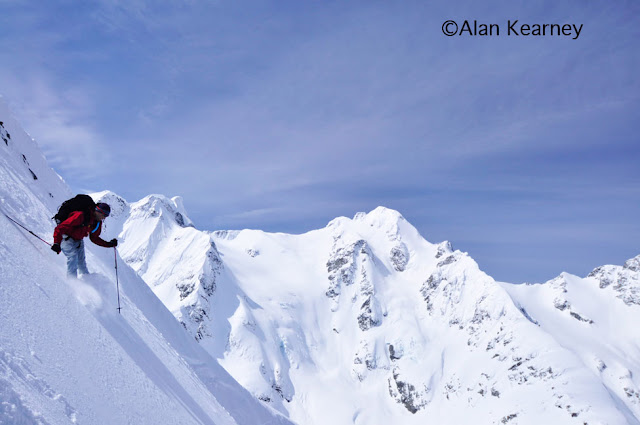 There was nothing left to do but a bunch more powder turns to the bottom, skin back up to the hut, pack up, and ski out.  Nobody got hurt, or eaten by bears.  There were just tired muscles and fine memories of a perfect trip. 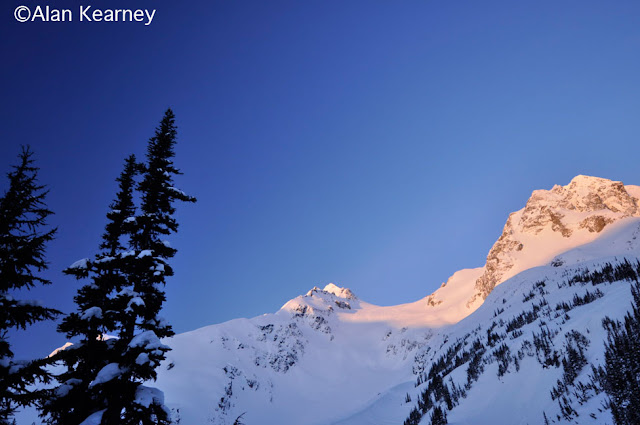 Where ridges snake to the mountain's maw.
A weary skier stands in awe.

And in the heavens high in the sky.
I dream of the sunrise and wings to fly.